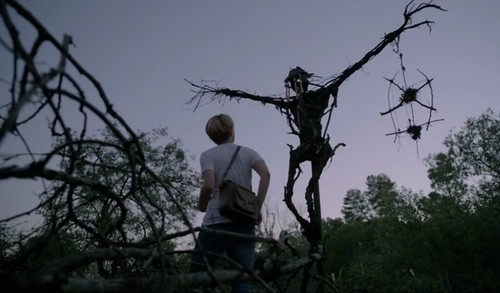 A young couple decides to move to the woods because that’s what people do when they want to “find themselves”. After being in seclusion for a while, they discover that a famous reclusive Banksy-like artist lives near them. He is known for creating creepy scarecrow/talisman type sculptures which have always been shrouded with mythos and mystery.
Soon strange things are afoot almost as though they had moved to a Circle K (kudos to those whom get the reference).

Reality and dream worlds collide into a messy, incoherent goo of a motion picture. Also, it’s a found footage movie of sorts with the typical annoyances like who is shooting this footage, why is this footage being shot, and there is no script so let’s have the actors make up shit that “seems” natural.

The film is chockfull of supposed tension, wannabe “holy shit” moments, and an ending that seems to have been thought up first and then the rest of the movie was constructed as a build up to this uninspired payoff. Skip this movie.

Side Note: The only redeeming thing about this movie is that its running time is less than 90 minutes. However, it feels much longer.