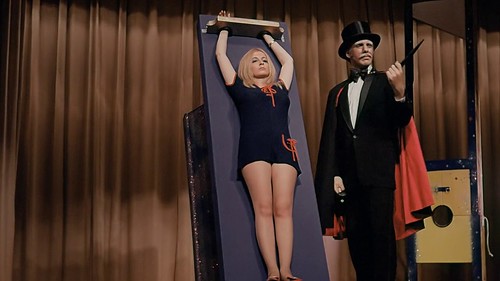 A master illusionist performs to a crowds of two dozen people, at most. His act first off with generic parlour tricks and ends with is performing an act of torture on a female volunteer from the audience. This is not good movie. I wanted to like it because I am a fan of Herschell Gordon Lewis, the aptly nicknamed the Godfather of Gore. Crude special effects and cutaways of bloody meat are sewn together to try and make an interesting story.

The film is very repetitive. There’s a stage performance, the female volunteer ends up dying later on, questions come up, repeat. And it totally obvious the audience scenes were shot back-to-back-to-back because it’s filled with the same people every night just in different seats. There was a part towards the end that could have been really redeeming. The female lead starts listing off all of the unanswered questions of the movie. They could have ended it there with that meta sequence. Instead it’s followed by a completely preposterous beat that just ruins everything. Followed by yet another twist that comes completely out of left field. I don’t think I even heard any dialogue after the reveal because I’m just in shock of the audaciously of them trying to get anyway with this ending.

My reviews usually end with a best line or side note bit, but this film doesn’t deserve it.