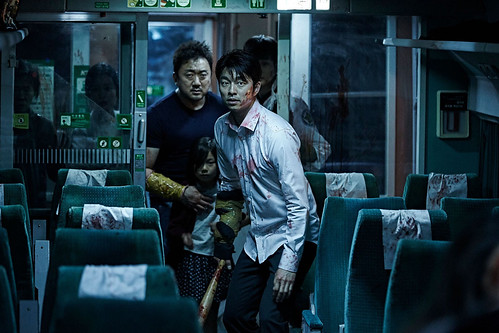 The only film I have ever watched, rewound (yes, rewound) and the immediately watched again.  Love me some Sorkin.

Which July release are you most looking forward to?

I love baseball movies. They are my favorite sports film genre. I don’t know whether it’s because there’s so much history, or because so much can happen in a game that can effect the outcome so there can be lots of little twists and turns along the way that are plausible or maybe because I played 13+ years of little league ball myself. Whichever the case, there’s no denying my affinity. I’m not going to argue that Major League is a better movie than Bull Durham. It probably isn’t. I just can’t wipe the goofy grin off my face or the goosebumps off my arms whenever Ricky Vaughn steps out of the bullpen. I feel A League of Their Own is a very underrated movie. There may be no crying in baseball, but it’s hard not to get emotional while watching this movie. Jon Lovitz steals every scene he’s in. I apologize for having the Bad News Bears remake on the list. I haven’t seen the original so I can’t include it. I thought Billy Bob was perfectly cast and the movie is actually quite funny.  And of course, The Sandlot is just very nostalgic.

Missed The Cut:  Rookie Of The Year, Little Big League and Fever Pitch

Jurassic World has been unleashed and to coincide with its release, I have compiled a list of dino facts you may or may not have known. Please read, enjoy and learn.

It was in 1993 when the movie world was first introduced the Jurassic Park. People flooded the theatres to see dinosaurs on the big screen as they’d never been seen before. The movie was high-lighted by state-of-the-art visual effects technology and featured state of the art technology such as an interactive CD-ROM. It was also filled with stale characters and even staler dialog. But that didn’t matter, the audiences weren’t there the listen. They were there to watch dinosaurs and dinosaurs is what they got. I still have an appreciation for the original, it is getting harder the view now that the thrill of the spectacle has worn off.

Fast forward 22 years and leapfrog two other sequels and we arrive at Jurassic World.The movie opens with two brothers (Zach and Gray) being shipped off to the island park while their parents’ sort of their own lives. Luckily, their aunt runs the park which has been up the running successfully for years. Aunt Claire (played by Bryce Dallas Howard) is a straight-faced, tight-arsed business woman whom is all about the bottom line and is more interested in the park’s profit than whether or not the patrons and the dinosaurs are happy.

John Hammond, the park’s original visionary, has passed on, but his passion lives on in the new owner, Masrani, wonderfully played by Irran Khan from Life Of Pi and Slumdog Millionaire fame. He is introduced early and shares the same vision as Hammond as well as his motto, “spared no expense”. He’s more concerned with the enjoyment of the park than he is the profit. It is learned that the park has genetically modified a new breed of dinosaur in order to appease the guests desire for bigger and scarier dinosaurs. Enter the Indominous Rex. It also reintroduces us to the only returning character from the first three movie, Dr. Henry Wu (B.D. Wong).

Concerns arise with the I-Rex’s enclosure, so Masrani instructs Claire to ask former military man, current employee Owen Grady to assess the structural integrity of the pen. We are then introduced to Owen (played by last summer box office champ, Chris Pratt) while he is training velociraptors using the clicker method which is the same method used training my dog. So it seems pretty legit. An accident occurs in the script to allow us the opportunity to see that Owen is a capable man of action and it also allows Pratt to audition for Indiana Jones by showing he can dive under a closing gate. At this time, we meet Hoskins (Vincent D’Onofrio) who heads up InGen Security. He’s interested in using the trained raptors for military mission purposes and he has his own hidden agenda as well.

Meanwhile, Zach and Gray have met up with Claire long enough for her the pass them off to her assistant, Zara, while she tends to business on the island. Claire dismisses the boys and she finally meets up with Owen. They obviously have history. There is playful banter between them that enhances her up-tightness and his alpha maleness. There is discussion of a first date, but nothing ever came of it. She convinces him to inspect the enclosure for the genetically altered dinosaur and he is less than impressed with the idea of creating the new “asset”. It is discovered that the Indominous Rex has been created using DNA fragments of an T-Rex, a cuttlefish, a tree frog and another classified entity. With the help of each animals attributes, the I-Rex escapes its paddock is loose on the island.

Unbeknown to Zach and Gray (and the rest of the 20,000 plus guests whom obviously never watched the first three movies or they would have known that things are bound to go awry), they are now in danger. The park slowly starts to close certain attractions and escort the patrons to safer environments. From the control room which looks like something straight out of Apollo 13, the action is being monitored by the last two supporting characters, Lowery and Vivian, played by Jake Johnson and Lauren Lapkus. Lowery provides a lot of the comic relief which includes him wearing a shirt with the original theme park’s logo. He gleefully brags that he bought it off of ebay. From here or out is where the movie picks up steam.

Jurassic World was directed and co-written by Colin Trevorrow. His previous work includes the under appreciated independent gem, Safety Not Guaranteed which also featured Johnson. There isn’t much of a plot here, but there is definitely a story. This is probably the best script of the series. The dialog is more fluid and less wooden and the humour seems natural and not forced in just for effect. The characters are one-dimensional, and their actions are predictable, but they are likable.

The film runs for a little more than 2 hours, but it moves at a quick pace and I do not recall being bored. The action sequences are well thought out and real tension is built when danger is impending. There are plenty of homages and easter eggs for fans of the originals to seek out, but you could easily watch this with little to no knowledge of the series. I was hoping for an appearance of a one-armed Samuel L. Jackson, but *spoiler alert* no such luck.

There was surprisingly a lot of carnage and this movie probably boasts more deaths than the previous three instalments combined. While there no was open-shirted Goldblums to look at, I really enjoyed the movie. Nothing will compare to the wonder of Jurassic Park. Jurassic World holds its own and it’s the sequel we’ve been waiting for with promise of another one to follow. The action may too intense for younger viewers and there is an abundance of spatter that didn’t occur in the previous films.

I went in with low expectations and I came out with a smile. It’s not the best of the series, but it is by far the best since the original. I had a good time and that’s all I usually ask of a movie.

“Louie, I think this is the beginning of a beautiful friendship.”